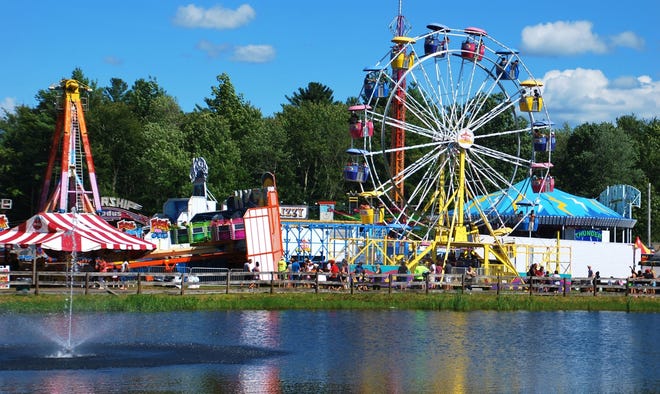 LANCASTER – The Bolton Fair cannot be stopped. Paused, maybe, but not stopped.

World wars and pandemics may have interrupted the 148-year history of the traditional fair, but this year it grows beyond its return last year as it readies for the 139th Bolton Fair.

From Aug. 12 to 14, the fair will show off everything from agricultural displays to midway rides, with fields full of activities, entertainment and food for fairgoers.

Fair President Rose Darden has been overseeing the fair, initially involved 31 years ago.

“I started in the exhibit hall at Emerson School,” Darden said. “My first job was to make sure people didn’t touch the exhibits.”

Today, she and an army of volunteers ensure those exhibits are ready for fairgoers.

Since 1874, volunteers have been at the heart of the preparation, a year-round effort that intensifies as fair time approaches.

Starting in Bolton, it more recently (in the timeline of its history) moved to its own property at the Lancaster Fairgrounds on Route 117.

“We’re taking advantage of that space,” Darden said, with popular attractions such as demolition derbies.

One might wonder what could be added to the full lineup (available at boltonfair.org). But every year seems to bring a few new attractions, or the return of old favorites.

Livestock, tractor pulls, agricultural displays all harken back to the original fair roots.

But a century – make that almost a century and a half – has brought additions.

Reflecting on her own involvement, Darden said simply, “it’s been wonderful.

“We’re excited to be back from last year; it was tough after COVID.”

She said there are probably 25 core volunteers who make the fair work, people who “are on top of this year round. There are quite a number who have been here well over 20 years.”

Younger volunteers in their 20s “are the future of the fair and have just as much passion as the mentors.”

For all the volunteers – “they’re fabulous,” Darden said – there is excitement about getting back together every year.

As long as the fair can provide the space, Darden said, she expects things like the animal shows will continue.

“They are so dedicated and committed,” she said of groups such as 4-H, and “99% of shows are youth shows, for the children,” which puts the focus on the youth.

There is a lot of incidental learning involved, from older crafts to agricultural details.

“People being able to talk to animal people, and the challenges they face,” helps educate people about the reality of where their food comes from.

In a fabric and quilting exhibit, exhibitors sit down and teach and demonstrate, Darden said.

The blacksmith exhibits includes demonstration of carpentry as the fair showcases artisans.

An added sawmill demonstration will show the wood being cut and planed.

In the attractions category, the motorcycle show – what Darden called “the true daredevils” – will be performing all three days.

The demolition derbies will run both Friday and Saturday nights.

Entertainment runs the gamut, from music to Rainforest Reptiles.

The fair website includes details on the shows, schedules and a map of the site.

The parking will replay last year’s plan, with opportunities for dropping off at the fair’s location.

But parking will be limited to the Route 70 location, opposite Kimball’s. Shuttle buses will bring fairgoers to the fairgrounds site, perhaps offering them the option to join in singing “The Wheels on the Bus.”

Guest pick up and drop off will be at Gate 2 of the fairgrounds on Route 117; the fair encourages patrons with large strollers or guests with mobility restrictions to use that option before parking at the fair’s main lot.

Early tickets purchased online are discounted to $12 a day, a price that rises to $15 once the fair starts.

“We encourage people to buy online, or even on the bus, to make for a quicker entry at the fairgrounds,” Darden said.

And Thursday night’s Midway opening has no separate admission charge.

Buying in advance can also access packages, such as a Mega Pass that combines fair admission and the Midway.