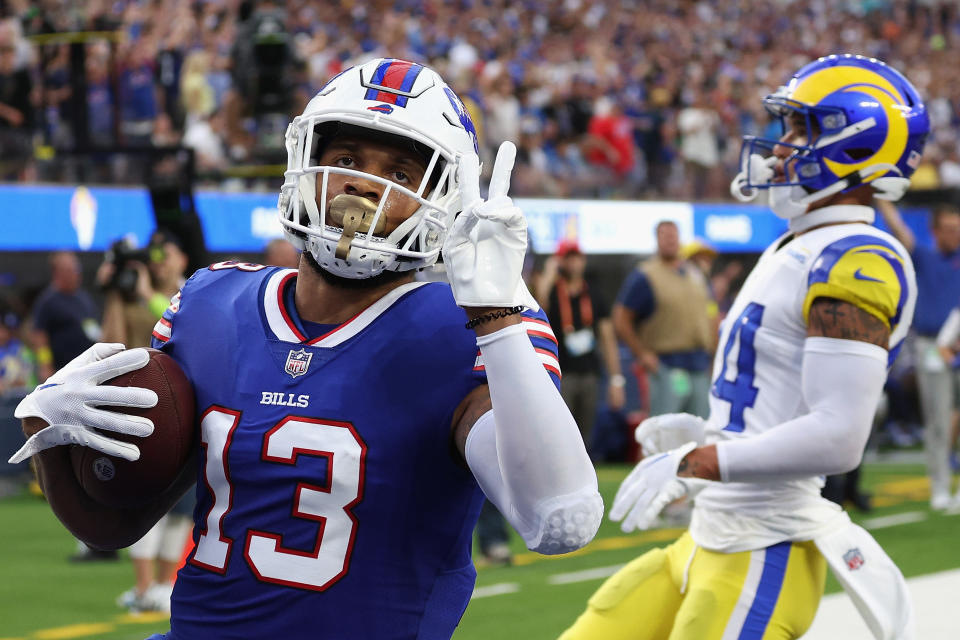 The Buffalo Bills were far from perfect on Thursday night. That’s what should scare the rest of the NFL.

Things won’t turn out well for any other team in the NFL that plays at the Los Angeles Rams this season, turns it over four times and doesn’t hit an explosive play for three quarters. Any other team doing that will likely lose. The Bills won by 21.

The Bills spent all offseason hearing about being Super Bowl favorites, and they looked the part on Thursday night in a jaw-dropping 31-10 win. Josh Allen was surgical. He was 26-of-31 for 297 yards. The offensive line nullified Aaron Donald for the most part. The defense almost never blitzed but still got a ton of pressure on Matthew Stafford by rushing four. The Bills sacked him seven times. The Rams had less than 150 yards on offense into the fourth quarter. The Bills outgained the Rams 413-243.

On a night when the Rams unveiled a championship banner, the Bills looked exactly like a Super Bowl team should look. Had it not been for a few turnovers, it would have been an even bigger demolition. Of the reigning champs. In Los Angeles.

Look out, NFL. The Bills could be special this season.

Bills have a dominant performance

The Bills looked like the dominant team from the first few snaps of the game. They just couldn’t stay out of their own way.

Buffalo turned it over three times in the first half. Isaiah McKenzie should have hauled in a pass but let linebacker Terrell Lewis wrestle it away from him for an interception. Rookie running back James Cook fumbled on his first NFL carry. And Rams cornerback Troy Hill made a great play on a pass over the middle for another interception.

That helped keep the Rams in the game. Cooper Kupp’s pretty touchdown at the back of the end zone and a 57-yard field goal by Matt Gay at the end of the half allowed Los Angeles to go to halftime tied 10-10. The Rams had to feel fortunate. The Bills were the far superior team but they didn’t pull away in the first half.

It was plausible that last season’s champs would adjust in the second half and their band of stars would look a lot better. Then to start the third quarter, the Rams went three-and-out and the Bills took it right downfield and scored a touchdown. It was clear the first half wasn’t going to be a lot different than the first and the dam would eventually break. Did it ever.

Rams could not keep up with the Bills

The Rams had a plan on defense and executed it as well as they could have. It will just be hard to take away everything the Bills do well.

The Rams played a lot of soft zone, taking the deep game away from Allen. That was fine with Allen, who kept taking what the Rams gave him. He completed 23 of his first 26 passes. He didn’t hit anything deep downfield or even try through three quarters. It was the sign of a mature quarterback who wasn’t going to get impatient and press. He just kept picking up first downs. Allen forced the Rams to get impatient, and that’s when the Bills took over.

Finally an opportunity presented itself to start the fourth quarter, when the Rams blitzed and there was no deep safety help. Gabriel Davis hauled in a 47-yard catch on a post pattern. Allen finished the drive by taking off and running — he did that often, and took a scary amount of punishment — and reaching the ball over the goal line as he was hit by linebacker Bobby Wagner. That made the score 24-10. It seemed like it should have been much worse for the Rams.

Stafford threw an interception after that, Stefon Diggs ran by Jalen Ramsey in a zone coverage and Allen fired a dart to him for a 53-yard touchdown. The rout was on.

The result probably doesn’t say too much about the Rams this season. They’re loaded again and they’re going to be very good. Thursday night’s result was much more about the Bills. They were touted as Super Bowl favorites all offseason. They looked the part in the season opener.