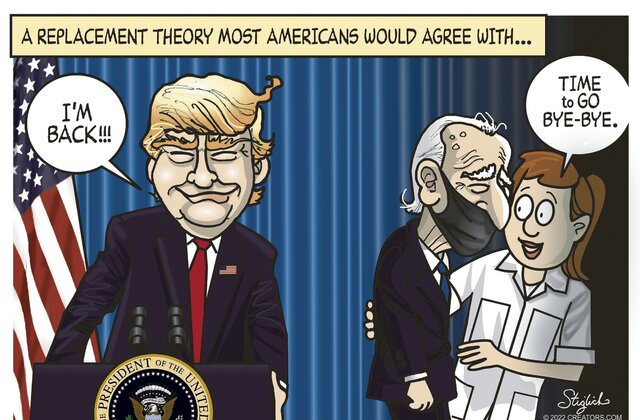 It was exactly the scene Russian president Vladimir Putin dreaded: The American president, standing in the Rose Garden with the leaders of Sweden and Finland, ready to expand NATO in response to Putin’s attack on Ukraine.

“New members joining NATO is not a threat to any nation,” Biden said, offering America’s “strong support” of Finland and Sweden’s bid to join the defensive security alliance.

“In the face of aggression, NATO has not grown weaker or more divided. It has grown stronger, more united,” said Biden, flanked by Finnish President Sauli Niinistö and Swedish Prime Minister Magdalena Andersson.

“In recent years, doubts began to arise: Was NATO still relevant? Was it still effective? Is it still needed in the 21st-century world?” Biden said. “Today there is no question NATO is relevant, it is effective, and it is more needed now than ever. The indispensable alliance of decades past is still the indispensable alliance for the world we face today and, I would argue, tomorrow, as well.”

Putin’s Russia has been increasingly surrounded by NATO countries since the fall of the Berlin Wall, with former Soviet satellites joining the alliance. If Finland’s bid is accepted, Russia will be bordered by five NATO nations, including Latvia, Lithuania and Poland.

Russia’s invasion of Ukraine, which is not a member of NATO, is seen as an effort to weaken and divide the alliance while expanding Russian influence in the region. But the attack had the opposite effect, spurring the two steadfastly neutral Nordic nations to apply for NATO membership.

“The Finns’ willingness to defend their country is one of the highest of the whole world,” Niinistö said. With the Russian invasion, “the masks have fallen and we see only the cold faces of war,” he added.

“Russia … has changed Europe and our security environment,” Niinistö said.

Andersson said that “today, the situation in Ukraine reminds us of the darkest days of European history,” and that “we stand together more united than ever.”

“Sweden has chosen a new path,” Andersson said. The country, which had long declined to join the security club, “will be best protected in the NATO alliance,” she said.

Biden urged the Senate to move “efficiently and quickly” to consent to Finland and Sweden’s application. Turkey has opposed the expansion, which could derail Sweden and Finland’s application, since all 30 NATO members must agree. But NATO Secretary-General Jens Stoltenberg said Thursday he was confident Turkey would come on board.

“When an important ally (such as) Turkey raises security concerns, raises issues, then of course the only way to deal with that is to sit down and find common ground,” Stoltenberg told reporters in Copenhagen, Denmark.

Article 5 of the NATO charter says that an attack on one nation is an attack on all, meaning fellow NATO nations are obligated to defend other NATO countries under attack. Ukraine has pleaded to be allowed to join NATO, but foreign leaders have not entertained the request, pointing out that Ukraine does not yet meet the standards for membership.

Biden recalled that the last time Article 5 was invoked was after 9/11, when NATO allies joined to defend America.

“The United States will never forget that,” Biden said.