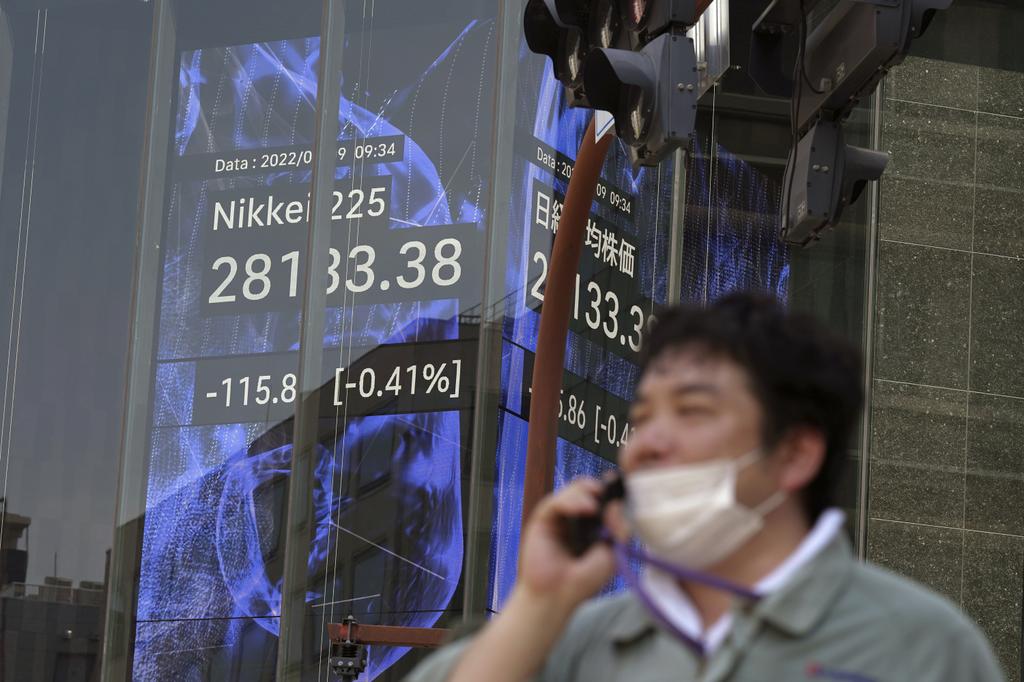 A person wearing a protective mask walks in front of an electronic stock board showing Japan’s Nikkei 225 index at a securities firm Tuesday, Aug. 9, 2022, in Tokyo. Asian shares mostly declined Tuesday amid a global fall in technology shares, including Japan’s SoftBank, which has reported hefty losses caused by the market downturn. (AP Photo/Eugene Hoshiko)

TOKYO — Asian shares mostly declined Tuesday amid a global fall in technology shares, including Japan’s SoftBank, which has reported hefty losses caused by the market downturn.

Such worries are coming on top of concerns about inflation and what central banks might do to curb that trend. Higher interest rates tend to work as a minus for share prices.

Japan’s technology investor SoftBank Group Corp. dropped more than 4% in Tokyo trading. On Monday it reported a record quarterly loss of $23 billion. A global nose-dive of technology-related issues, such as Chinese e-commerce giant Alibaba, dragged on its sprawling portfolio of investments.

Analysts monitoring Asian markets said regional tensions also remain a risk, because of the flareup between China and Taiwan after the recent visit of U.S. House Speak Nancy Pelosi to Taiwan.

“It is worth keeping track of the geopolitical landscape as any major developments on the China/Taiwan front could impact overall risk demand. China confirmed it would extend military drills around Taiwan, and the military will conduct ‘regular’ exercises on the eastern side of the median line of the Taiwan Strait,” said Anderson Alves at ActivTrades.

Also of concern are the rising cases of COVID-19 in some Asian nations, and their potential impact on supply chains that are a lifeline to some of the region’s biggest manufacturers.

The market’s latest gyrations came as investors prepare for a busy week of economic updates that could help answer whether the Federal Reserve’s efforts to cool the economy and quell inflation are working, or whether the central bank will continue aggressively raising interest rates. Wall Street is worried that the Fed could hit the brakes too hard and cause a recession.

The Fed is expected to hike short-term interest rates by another 0.75 percentage points at its next meeting.

The U.S. Labor Department will release its July report for consumer prices on Wednesday, followed by its report for prices at the wholesale level on Thursday.

This week’s inflation updates follow reports last week showing the employment market remains strong. While that’s good for the economy, it has complicated the Fed’s effort to cool inflation.

Investors are still reviewing the latest round of corporate earnings, which could also provide more details on how hard inflation is hitting consumers and businesses.

Bond yields fell. The yield on the 10-year Treasury, which influences interest rates on mortgages and other consumer loans, slipped to 2.76% from 2.83% late Friday.

Brent crude, the international standard lost 61 cents to $96.04 a barrel.