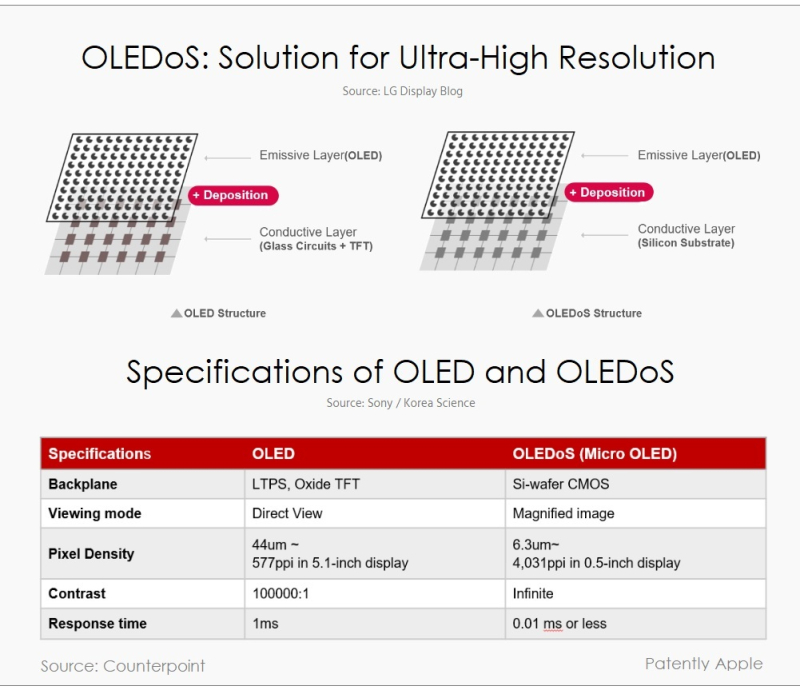 On Monday Patently Apple posted a report titled “Apple Suppliers Sony, LG & Samsung Displays are working on OLEDos and LEDos for future Apple Mixed Reality Headsets.” The report noted that OLEDoS is expected to be used in Apple’s first generation mixed reality headset set to debut in 2023. Sony and LG are to be Apple’s initial suppliers of the next-generation of display, with Samsung possibly coming on board down the road.

On Friday, Counterpoint published a report covering OLEDoS that they deemed a technological breakthrough for AR/VR devices. It would almost explain Apple’s delay in debuting their first generation mixed reality headset. A breakthrough of this kind is going to allow Apple’s coming headset to standout in the market above competing headsets right out of the gate and justify it’s premium prices.

Today, Meta’s Oculus Quest 2 have displays with a 72Hz refresh rate which is even lower than 120Hz presented on some smartphones. Low refresh rates may cause dizziness even after a short while and low resolution display are known to be causing user eye strain, something that Apple wanted to avoid with their first generation device. In contrast, Apple’s first mixed reality headset will offer displays with fine pixel size, a high refresh rate with high resolution.

The average resolution of OLED smartphones is 550 ppi but AR/VR devices require about 3,500 ppi because they feature near-eye displays. Sony and LG, Apple’s suppliers for this next-gen display have charts below explaining OLED v. OLEDoS displays.

Counterpoint – Research Associate Yeree Yoon states that “OLEDoS (OLED on Silicon) is a display panel that typically has a diagonal length of less than 1 inch and meets the 3000 ppi-4000 ppi resolution criteria of AR/VR device displays. Existing OLED displays use Low-Temperature-Poly-Silicon (LTPS) or Oxide TFT based on glass substrates. But OLEDoS uses silicon-wafer-based CMOS substrates. Using silicon substrates, ultra-fine circuit structures typically used in semiconductor processes can be reproduced, which in turn lead to the creation of ultra-high-resolution OLEDs when organic matter is deposited on them.

OLEDoS features high efficiency, high luminance, infinite contrast, fast response and long LED life compared to OLED. Because the size is smaller than 1 inch, the user does not see the panel directly but sees the enlarged image through the optical lens. When used on AR/VR equipment, it shows high resolution in a small, lightweight wearable device.

Apple appears to be on track to be one of the first industry players to be adopting OLEDoS. It’s cost structure and availability is likely to leave most competitors from adopting these advanced displays until sometime in 2025-2026. By then, Apple may be shifting to LEDos displays that LG is now developing for Apple which are rumored to be aiming for resolutions in the 6,000 to 7,000ppi range or double OLEDoS.