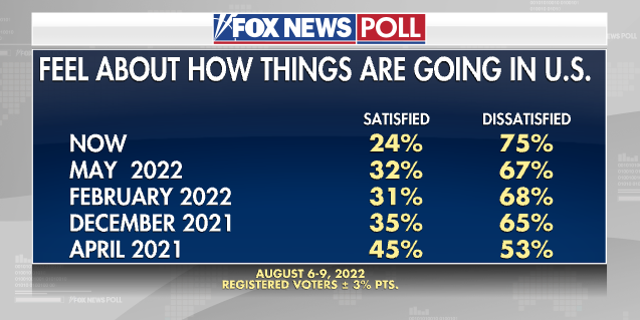 ST. LOUIS – Americans outside Busch Stadium told Fox News how they felt about the state of the nation, with many unhappy with its divisiveness.

“I’m very concerned about with the direction of the country and some of the very serious animosity that’s going on,” Sandra, from Oklahoma, said. “I worry about my grandchildren and my great-grandchildren and what we’re gonna leave for them in the future.”

Three-quarters of registered voters are dissatisfied with America’s direction, a nearly 25-point increase from April 2021, according to a recent Fox News Poll.

“I think we need to get to a point where we stop arguing within our own tribes and start working together,” Zack, from St. Louis, said. “We all still want what’s best for the country, even when it looks differently.”

FOX NEWS POLL: RECORD 70% SAY LIFE WILL BE WORSE FOR THE NEXT GENERATION

A Fox News poll of how voters feel things are going in the US found 75% of respondents are dissatisfied with the state of America.
(Fox News)

Betsy, visiting the Gateway to the West, told Fox News: “I would like to see Congress in particular try to work together rather than keep throwing barbs at one another and keep pointing fingers.”

Bill, from St. Louis, said the country would be better without radicals on either end of the political spectrum.

“Most of us get along,” Bill said. “It would be nice to quit arguing with each other.”

One man said he’d like to see improvements from the Biden administration on a few key issues.

“I wish they had better foreign policy, better economic stuff going on,” he told Fox News. “But I think they’ve done a halfway decent job.”

President Biden’s approval rating recently rose to 40% – his highest in two months – following a series of legislative wins, according to a Reuters/Ipsos survey.

“I don’t like our president,” Becky, from Springfield, Missouri, said. “I think his presidency has failed us.”

Becky cited concerns about fuel costs and the economy.

Sandra, from Oklahoma, says she is concerned about the direction of the country.
( Megan Myers/Fox News Digital)

“The gas prices going down where we live that’s a positive,” Sandra told Fox News, though she noted that grocery prices are still high.

“If the politicians and the people in power would listen to us on the ground, maybe they would go ‘oh, well, maybe we could do something a little bit different that might help the country a little bit better,’” Sandra said.