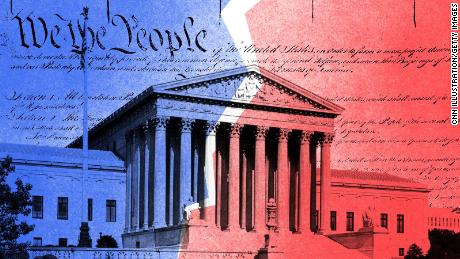 As red, white and blue fireworks burst in air on Monday night, politics may not be at the forefront of most people’s minds.

Yet a fractious partisan age is undeniably penetrating everyone’s lives.

In another example of startling political disruption, an activist Supreme Court, protected behind high metal fences in its marbled Washington chambers, just stripped away the constitutional right of millions of women to have an abortion. The decision validates a half-century campaign by conservative activists, many of whom have sincere moral objections against abortion, which they equate with the murder of an unborn child.

But the Supreme Court’s decision and the emerging patchwork system of abortion restrictions across the US have been met with outrage in other parts of America. On Sunday, South Dakota Republican Gov. Kristi Noem, a potential Republican presidential candidate, defended her state’s abortion ban on CNN’s “State of the Union” when asked whether a 10-year-old girl who was raped should be forced to give birth, or to explain how her state will care for women deprived of the right to end a pregnancy. Her evasions encapsulated how many supporters of abortion rights see hypocrisy and inhumanity among some of those who profess to care for life — and the irreconcilable divide on this issue in the country.
Given the political discord boiling way beneath the surface of Monday’s national celebrations, it’s hardly surprising that a staggering 85% of US adults in an Associated Press-NORC poll released last week said things in the country are headed in the wrong direction. The survey formalized what is obvious: for all its advantages, abundant resources, comparative prosperity and history of working to perfect its democracy, the United States is not a country at ease with itself right now. The cliché that America’s best days are ahead is becoming harder to believe.

Social tensions are being exacerbated by economic pressure.

The war in Ukraine is making food bills more expensive and spiked gasoline to record prices. Biden’s struggling presidency appears out of ideas as to how to help after potentially worsening the situation by pumping hundreds of millions of dollars of spending into the economy.

Gun crime in cities is recalling a more violent past and every Monday brings a grim accounting of the weekend’s mass shootings.

The shadow of Trump’s violent coup attempt hangs over the country.

A flurry of restrictions on voting in many conservative-led states and the GOP’s refusal to renew voting rights legislation harken back to a poisoned era of racial repression. Liberals who once dreamed of a new Franklin Roosevelt are dissatisfied with the results of their narrow monopoly on political power in Biden’s Washington. But their radicalism also risks alienating the crucial middle ground of voters who ought to be up for grabs as the GOP dives right.

Incredibly, the country is struggling to make enough infant formula to feed its babies — and is having to fly in emergency supplies from abroad — a metaphor if there ever was one for a time when things just don’t seem to be going very well.

And in some regions, the spectacles that bring Americans of all persuasions side by side — the July Fourth fireworks shows — are being dampened by bans imposed because the land is tinderbox dry because of global warming, another threat that defies a political consensus for action.

Almost every day, there’s a controversy or political fight that underscores the antagonism between more moderate, diverse and socially tolerant American cities and suburbs and the conservatism of rural America.

Many leaders on both sides of the aisle accentuate differences for political gain, only adding to the sense of anger coursing through the country. Elected leaders who seek to bring those with divergent views together are an endangered species.

Increasingly, for those who think about politics, each side of the divide sees the other as an existentialist threat to their idea of America — a schism of perception especially demonstrated in recent weeks by the fight between supporters and opponents of abortion rights.

On the right, disillusionment with government itself — which fueled Trump’s rise and is being exacerbated by his election fraud lies — is a driving force in a Republican Party that is giving up on democracy.

On the left, more and more people see a Supreme Court that is openly flouting majority opinion as illegitimate. The high court was once seen as above the partisan flames. But even its justices have been caught up in a tide of fury, with sniping more characteristic of social media than Supreme Court opinions. During oral arguments before last month’s landmark overturning of Roe v. Wade, liberal Justice Sonia Sotomayor wondered whether the court could “survive the stench” of stripping away abortion rights. In his majority opinion that did just that, Justice Samuel Alito relished dismissing the reasoning behind Roe as”egregiously wrong.”

The Supreme Court was once seen as a moderating force for stability. But in its new zeal for ripping up precedents, the conservative majority has turned it into yet another destabilizing force in society.

So what grounds are there for hope this Independence Day? Biden is insisting that things are not as bad as they seem, seeking to fulfill that part of a president’s duties that involve bucking the country up.

“You haven’t found one person, one world leader to say America is going backwards,” the President insisted as he wrapped up a visit to Europe last week.

“America is better positioned to lead the world than we ever have been. We have the strongest economy in the world. Our inflation rates are lower than other nations in the world,” he said, while being somewhat economical with the truth when it comes to the spike in inflation that he once dismissed.

Biden, of course, has an interest in painting things in a better light than they are, especially with midterm elections approaching in which Democrats are likely to suffer from his sub-40% approval rating.

But it’s not all darkness. Biden has piloted the United States out of the depths of the pandemic recession. Prices might be high and consuming wage gains, but unemployment is around 50-year lows. This could cushion the impact of a recession many experts fear is on the way.

Hindsight showed that Biden’s declaration of partial independence from the Covid-19 last July Fourth was premature — and politically unwise. But life is far closer to normal than it was a year ago and the United States is better prepared to handle any resurgence of Covid-19 in the fall. There are plenty of vaccinations to go around, though again, politics appears to be threatening the common good with refusal to take such precautions a badge of honor among some grassroots conservatives.

Washington may not be as irredeemably broken as it seems. Since last year, Republicans and Democrats have combined to pass a huge new law fixing the country’s aging infrastructure — a task that evaded recent presidents before Biden. And after a deal between Republicans and Democrats, the Senate passed one of the most sweeping firearms safety laws in a generation. The measure might have fallen far short of the pleas of grief-stricken family members of the mass shooting victims in Buffalo, New York, and Uvalde, Texas. But it was a sign that even in this vicious political climate, incremental change fashioned through political institutions is not impossible.

For the first time in two decades, Americans are not fighting major wars abroad. And Biden’s leadership of the West in standing up to Russia’s invasion of Ukraine may represent the most significant show of American global leadership since the Cold War.

The bravery of those who stood up to Trump’s attempt to steal power in 2020 is also an inspiration this July Fourth. Wyoming Republican Rep. Liz Cheney, the vice chair of the House January 6 committee, may alienate liberals with her political views, but she’s written herself a place in history by standing up for democracy, unlike many of her genuflecting GOP rivals who run perpetually scared from Trump.

Cassidy Hutchinson, a former Trump White House aide, put far more senior colleagues to shame by showing how one person can take a stand for truth with her televised testimony before the House committee investigating the Capitol insurrection.

And if the majority of the country that didn’t want to see Roe reversed wants an example of turning demoralizing defeat into eventual victory, they can look to the years of activism by the anti-abortion movement to see how political change can be forged by generations of campaigners who stay committed to the goal.

Because this July Fourth, America still does have a democratic political system that can be shaped by the people.

At least, it does for now.