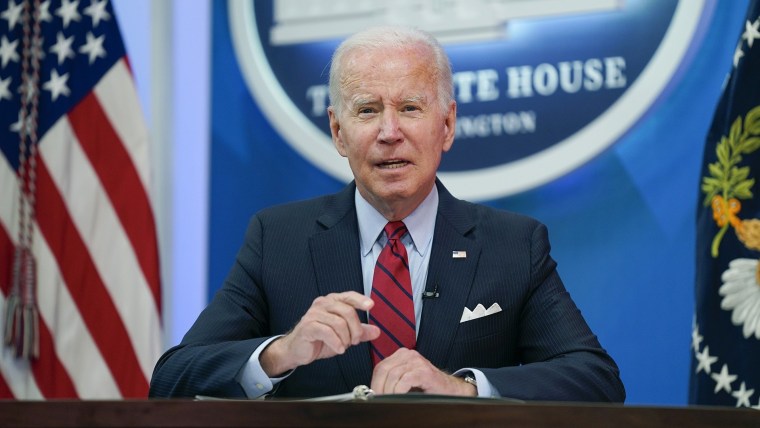 WASHINGTON — Republicans are torn between their policy goals and political ones in the wake of the Supreme Court’s ruling overturning Roe v. Wade, with activists’ rush to capitalize on the ruling running into the political reality that abortion rights remain popular in many of this year’s midterm battlegrounds.

“I don’t think this alters the midterm advantage for Republicans because of Biden’s economic woes,” said former Virginia Republican Rep. Tom Davis. “But in a cycle that is all about turnout, it is a net benefit for Democrats. Angry voters vote.”

For months, all signs have been pointing to a landslide victory in November for Republicans. But some in the GOP now worry that even if they retake the House and make overall gains, abortion politics could cost them a handful of key races — and with a 50-50 Senate, every race matters.

“This a massive gift to the Democrats and one they could not have conjured up for themselves,” said veteran GOP strategist Mike Madrid, noting the portion of Americans saying they want Democrats in control of Congress has risen in polls taken since the decision. “With inflation as high as it is, for the first time I think it’s a jump ball. The Democrats are now back in it.”

“If I were a betting man,” Madrid added. “I would say Republicans pick up a majority, but maybe it’s not as big as it could or should be.”

GOP candidates in key battlegrounds want to focus on inflation and make the election a referendum on the unpopular president, but that may be complicated now that conservative officials are rushing to outlaw abortion in many states, finally given the chance to do so after decades of trying.

Most Republican officials, including those coordinating their party efforts’ in Washington, say they’re not concerned — even as they advise candidates in battleground districts to avoid talking about abortion and pivot back to the safer territory of economic issues.

President Joe Biden’s approval rating is still languishing at historic lows. The percentage of Americans who say the country is on the wrong track continues to be at record highs. Nearly every president since the Civil War has lost House seats in midterm elections.

And while the high court’s ruling galvanized the Democratic base, many liberals are also frustrated that the fall of Roe happened on Biden’s watch and that Democratic leaders haven’t done more to fight it, making it unclear if their anger will translate to votes for the party in November.

“Democrats are living in an alternate reality if they think this election won’t be a referendum on the record-high price increases their policies created,” said Michael McAdams, the communications director for the National Republican Congressional Committee.

Polls, like a new Monmouth University survey out Tuesday, found that while the number of respondents who listed abortion as their top issue rose after the Dobbs decision, it went from just 1% to 5%. Inflation, gas prices, and the economy registered as top concerns of much larger segments.

Even among Democrats, just 9% said abortion was their top issue while 25% picked inflation and another 11% named gas prices specifically.

“Economic concerns tend to rise to the top of the list of family concerns, as you might expect, but the singular impact of inflation is really hitting home right now. And most Americans are blaming Washington for their current pain,” said Patrick Murray, director of the non-partisan Monmouth poll.

The Republican State Leadership Committee, which helps coordinate GOP races in state legislatures, where abortion battles will now be fought, conducted its own poll shortly after the Dobbs decision and found that Republicans are still on track for a strong election — as long as they “stay laser-focused on making this election a referendum on the disastrous economic policies of Joe Biden.”

“While abortion is an issue people care about, the data makes clear that it is not among the top issues that will drive voting behavior in November,” reads the group’s polling memo, sent last week. “We have state Democrats in full retreat on the economy, and now is not the time to let them off the hook.”

Conservatives also want to try to flip the script by portraying Democrats as the real extremists on abortion, arguing they simply support state’s rights to make their own laws while Democrats want taxpayer-funded late-term abortions.

“The political gifts the other side has given us over and over and over, they have given to us again, and that is an unyielding position that has very, very little support, which is that all abortions up until the end, paid for by you and me, is a really politically unsaleable position,” said Marjorie Dannenfelser, the president of Susan B. Anthony Pro-Life America, which aims to reach 8 million voters across nine battleground states

Selling that, however, will require Republican candidates stay on message and avoid making the kinds of statements that alienate swing voters, like the one on “legitimate rape” that famously helped sink Todd Akin’s 2012 campaign.

“That is the one wildcard is how our candidates handle it. We’ve done a lot of work, exhaustive work leading up to now, the past several months communicating with sitting officeholders and candidates about this,” Dannenfelser. “But there are no guarantees that they’ll listen.”

Some candidates are listening.

Even the famously bombastic Republican Paul LePage, looking to reclaim the governorship of Democratic-leaning Maine, said “I don’t have time for abortion” when asked about the issue last week.

In Nevada, where Republican Senate candidate Adam Laxalt is pivoting to the economy while a Democratic super PAC is running ads claiming he supports “taking every woman’s personal decision and giving it to politicians,” Gubernatorial candidate Joe Lombardo said abortion rights are already settled law in the state and “I don’t support any change in that dynamic, but I also support pro-life.”

But other candidates who hail from the activist movement have vowed to push for abortion bans if elected, even in blue and purple states.

In Arizona, Donald Trump-backed gubernatorial candidate Kari Lake said on Fox News that she wants to ban abortion pills in addition to all clinics.

Some politically savvy Republican governors have pushed to restrict abortion without outlawing it completely, setting up a more favorable contrast for the GOP against Democrats who reject limits, said SBA List chief strategist Frank Cannon.

Georgia advanced a bill that would ban abortion after a fetal heartbeat can be detected, as soon as six weeks after fertilization, and includes exceptions for rape, incest, the life of the mother and if the fetus is deemed unviable. Florida’s abortion ban starts at 15 weeks, after the vast majority of abortions are performed, and includes similar exceptions.

Even Mississippi, one of the reddest states in the country, did not go as far as some activists are now demanding in much more moderate states. The same goes for Missouri, where anti-abortion activists are very influential within the GOP.

“It goes as far as we could possibly go,” said former Missouri State House Speaker Elijah Haahr, a Republican who helped enact his state’s abortion ban in 2019, which was triggered into effect by the Dobbs decision.

The state’s law allows abortion only in cases where it will save the life of the mother, but, Haahr noted, it does not ban the “morning after” pill or contraception.

Haahr, like some others, said that even if post-Dobbs anti-abortion efforts inadvertently help Democratic candidates in some races, he still expects that it will be “both policy-wise and politically, a winner for Republicans.”

In other parts of the country, though, Cannon said Republicans like Wisconsin Sen. Ron Johnson will find themselves in a tougher position, defending a 170-year-old law that bans most abortion triggered back into effect by the Dobbs decision.

“Wisconsin will be more complicated because it has a state law on the books from prior to Roe v Wade that was very protective of unborn children,” Cannon said. “Pro-abortion groups will attack Sen. Johnson for that legislation even if it is a state bill outside his purview.”

Johnson, like other Republicans in battleground states, has tried to reassure voters by telling them “abortion is not going away” and “it’s not going to be that big a change.” But that was in May, just weeks before the Dobbs decision and every abortion clinic in his state closed their doors thanks to that trigger law.

And in an era when even the most local politics are quickly nationalized, fortune may favor candidates who understand that dynamic best.

One GOP operative noted that in Florida, DeSantis is holding off on anything more restrictive than the 15-week ban while he seeks re-election, but is expected to go further if he wins a second term.

“The strategy is obvious,” the operative said. “Do it after the gubernatorial so as to not piss off suburban women, then screw them over after the election in order to appease fire-breathing pro-lifers in a presidential primary.”