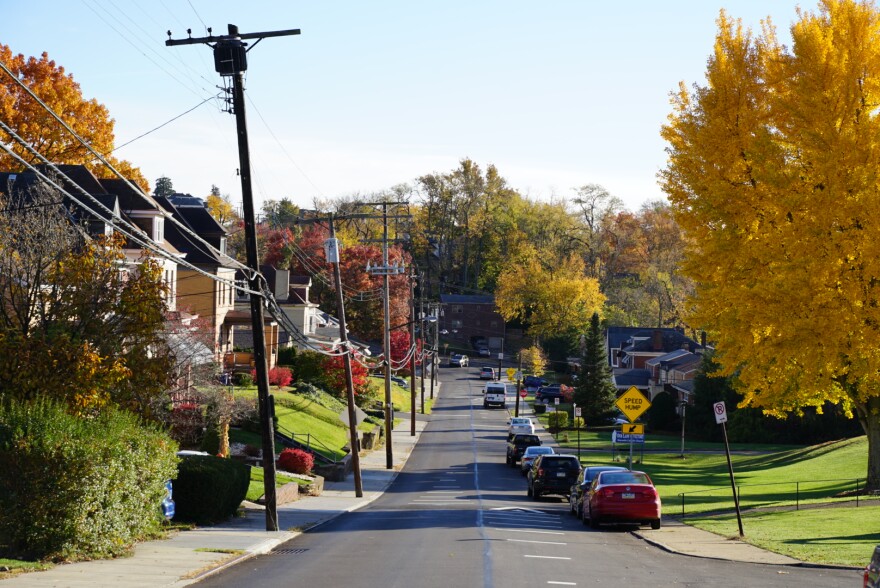 There are few places in Pennsylvania where the divide between Democrats and Republicans this election is more evident than on Tropical Avenue in the Beechview neighborhood of Pittsburgh.

The street is lined with brick houses and well-manicured lawns. In six lawns on one side of the street are signs for Republicans, like Senate candidate Mehmet Oz. And on the other side are all signs for Democrats, such as Oz’s opponent, John Fetterman.

According to several neighbors, the war of political signs started with Jim Gaetano in 2016. Gaetano bought the house he grew up in 12 years ago when his parents’ health was failing. The neighborhood has always been a Democratic stronghold, he said. But in 2016, he became disenchanted with what he saw as the over-policing of speech from liberals, including criticism of slogans such as “All lives matter” and “Blue lives matter.”

Gaetano doesn’t just have one sign this year: he has five, including two about the police. Most conspicuously of all, hangs a banner with a cartoon picture of former President Trump riding an elephant that says “Keep on Trumpin.’”

“I thought I’d demonstrate to my fellow, my Democratic friends and neighbors, that there’s a lot of people that don’t think like them,” he said.

He said his Trump banner hasn’t generated as much cursing and anger as it did in the last few elections. Oz wasn’t his first choice but Gaetano says he’s the best choice.

Two of the five signs on Gaetano’s lawn are pro-police signs, one prominently displays the phrase “All lives matter,” one is for Republican Mike Doyle and one is an Oz sign. Gaetano put up his police signs in response to Black Lives Matters protesters. He is worried about rising crime at night, including a murder in Beechview the last week of October. “I can count the murders in Beechview on both my hands. And if you added one foot to the toes because the murders are a big deal here,” he said.

On the other side of the street, Jody Weaver, says she has always supported Democrats but her husband only started putting up political signs in 2016 because of their dislike of Trump. When Joe Biden was elected president in 2020, her husband added lights to the signs, something he’d previously done for signs celebrating their 50th birthdays or their daughter’s wedding. Another house on the street built a life-size paper mache of Biden that year.

Weaver said the street’s politics used to be divided up differently. Her next-door neighbors used to be Republicans but are now Democrats because of Trump. Weaver worries that politics has become so heated. She can’t even talk to her mom about it, she said, let alone her neighbors. “I think the way the street’s divided is the way the country is divided,” she said. “And I don’t know what’s going to change that, at this point.”

Weaver was surprised to see her neighbors across the street put up Trump signs. “From their point of view, I don’t see why you would vote for them.”

Those neighbors are Honduran. Herminia Cerritos moved to Pittsburgh in 1995 after Hurricane Mitch devastated her hometown. She moved to Tropical Avenue five years ago because it was close to the Comfort Inn where her husband works. Cerritos cooks at a nearby Fairfield Inn and Suites.

But they aren’t Republicans. In fact, no one in the house is eligible to vote, according to Cerrito’s 15-year-old daughter, Angel. Her dad agreed to have two Republican signs in the yard after someone knocked on their door and asked. Angel says her family doesn’t have strong political views.

The reason there are so many Republican signs up this year is in large part due to Jeffrey Depp, the local Republican Committeeman who neighbors said went door-to-door, asking for Cerritos’ support. Depp said he was too busy to talk about his canvassing work on Tropical Avenue.

But Gaetano says having a Republican like Depp canvas the neighborhood is symbolic of the area’s changing political landscape. “They were never here before because it wasn’t worth it,” Gaetano said. “They couldn’t get any votes.”

Daniel Hopkins, a political science professor at the University of Pennsylvania, said political signs are mostly a reflection of which campaigns are well organized, rather than of how much support each candidate has. There is little evidence yard signs are effective at persuading undecided voters, except in lesser-known races and primary elections, where name recognition plays a bigger role.

Hopkins isn’t surprised that Tropical Avenue’s signs in large part reflect their feelings about someone whose name isn’t even on this year’s signs. “Both parties have found that a lot of the energy in the political systems is on the pro-Trump, anti-Trump axis, even when Trump is not president and not on the ballot,” he said.

Signs on a quiet road like Tropical Avenue are unlikely to make a difference, Hopkins said, because of how few voters, let alone undecided voters, pass by.

James Potter lives in the only rental house on the block, and he also seems to be the only one who hasn’t made up his mind yet. He told Depp he didn’t want to put up a sign in his yard. He dislikes how Republicans want to restrict abortion and how Democrats talk about defunding the police. “I disagree with both sides. And I agree with some on both sides,” he said.

Potter doesn’t trust Oz or Fetterman. The reason, he says, is not the signs, but two TV commercials. One commercial said that Oz has promoted weight loss products that didn’t work. And another commercial said that Fetterman relied on his parents’ help until he was 40. “I lived there with my parents. I was like 28. So I understand. But not to like 40. That’s pretty wild to me,” he said.

Potter’s still undecided but leaning toward Fetterman. Potter’s dad voted for Trump in 2016 but came to regret his choice. So, in the first election he paid attention to, Potter said he voted for Biden.

Potter is a cook at a nearby restaurant and his shift doesn’t start until 2 p.m. So he’ll have plenty of time on the morning of Election Day to cast his ballot before work.

If he ends up voting for Fetterman, Potter will likely be the only person on his side of the block.