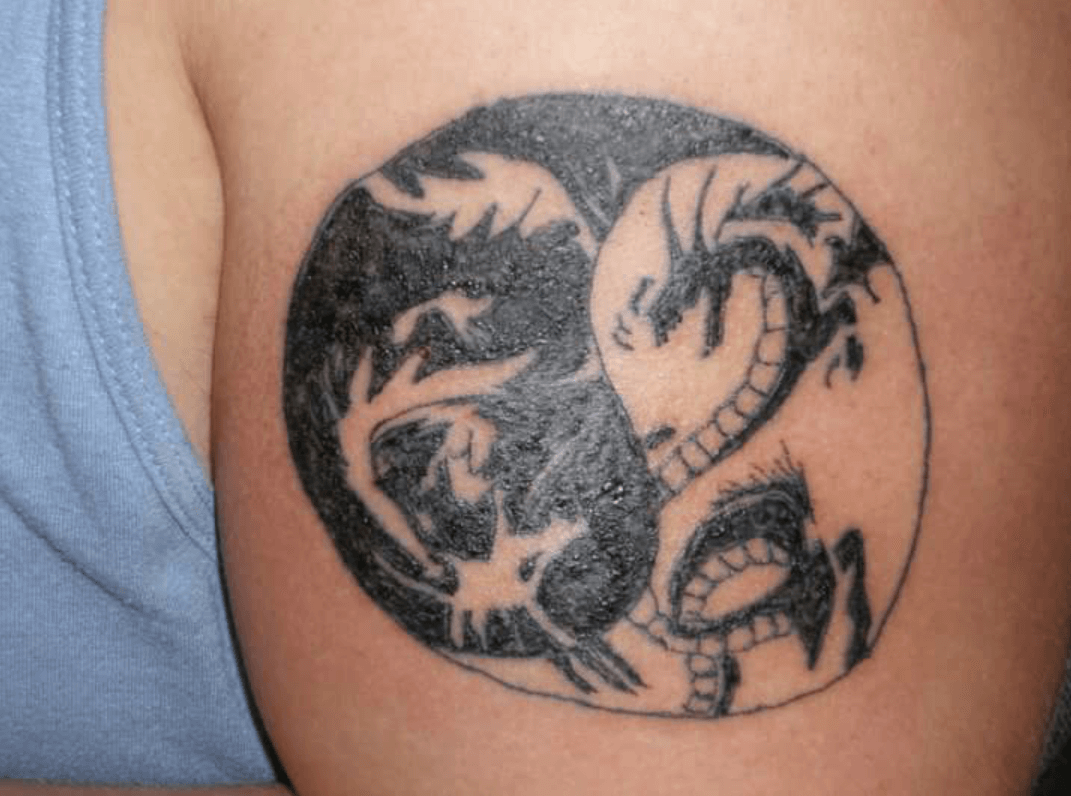 Some people spend hours agonizing over the perfect ink design for their tattoos. Others opt for their body art in an instant. No matter how much forethought went into a tattoo design, it’s a huge and somewhat permanent disappointment when the results are tattoo fails.

Whether the mistaken bad tattoo results in a funny tattoo, embarrassing artwork or even an epic tattoo better than anticipated, the recipient doesn’t have much choice but to wear it with pride forever. Check out the following 18 tattoo fails; try not to laugh!

Some of this hilarious body art probably started as a nice idea, but you wonder if the tattoo artist doesn’t need to learn how to start a tattoo business. In other cases, while looking at these funny tattoo fails, we wonder what the person was thinking!

1. When You Regret Letting Your Buddy Do Your Tattoo

Did a professional design this tattoo, or did somebody let their buddy ink them with a discount-store tattoo gun? Regardless, somebody should have used a stencil to draw a symetrical circle before creating this funny tattoo!

2. What Was This Tattoo Artist Thinking?

3. This Tattoo Is Her Spitting Image… Not Quite

If you want to avoid tattoo fails, you might want to avoid getting anyone’s face inked on your body. Unless you find a master tattoo artist, any portrait is doomed to become yet another funny tattoo like this example.

4. This Tattoo Seemed a Great Idea After Being Crowned the ‘Prome Queen’

Was this prom queen a little tipsy after the festivities when she got this embarrassing mispelling inked on her back? Or is this funny tattoo an example of the hazards when you get a tattoo you can’t see?

5. Sometimes All the Wrong Reasons Are No Reason at All

In some cases, a funny tattoo was inked with purpose. We don’t know who “Dave” is, but we have to admire his sense of humor to get such nonsense permanently inked on his body in a great example of tattoo fails.

6. Foiled By a Double Negative

Surely some tattoo fails could have been avoided by paying just a little closer attention. Even if the tattoo recipient couldn’t master grammar to save their life, we would hope the tattoo artist would recognize a double negative. Apparently not in tattoo fails like this one.

It only takes a single spelling error to create forever-embarrassing tattoo fails. Too bad his friends didn’t warn him to learn the difference between, “to” and “too.” Hopefully, this mistake didn’t make him hate his inked artwork for life.

8. Can the Worst Tattoos Get Better?

We wonder if this tattoo recipient took a photo to boast of their terribly misspelled body art and if the picture was captured in shock and horror at the resulting body art. With any luck, the guy was able to laugh at his permanent faux pas.

9. What Happens When Your Tattoo Looks Like a 5-Year-Old Inked It?

Before you get tattooed, be sure the tattoo artist can master your concept. This tattoo recipient might have decided to let his friend tattoo him with a tattoo gun bought off of some random site. We wonder how much money he paid for this atrocity among tattoo fails?

Some supposed tattoo fails are beyond funny, they make you comment about the person being tattooed. The resulting body art creates some of the most epic tattoo fails we’ve ever seen.

10. If You Really Want a Perpetual Turtle Head…

Obviously, this tattooed man’s idea was to boast a perpetual turtle head. It might not have been a tattoo mistake, but we get the sense the rest of his friends must have talked him into this body art design.

11. Gotta Give Him Credit for Creativity with His Ink…

If you’re going to be bald, you have to admire the man who will totally commit to his hairless condition and boast an epic bowling ball tattoo on top of his head. Hopefully, this design is a dream come true for some lucky partner.

In another example of why it’s important to find a tattoo artist you respect, this tattoo recipient couldn’t help but imagine an inked work of beauty and instead ended up with a weird and ridiculous interpretation. Now they are stuck with an example of failed tattooing.

13. Then There Are the Tattoos That Are Just Creepy…

It’s one thing to get a cool face tattoo, it’s another to get a skin design so creepy you scare others from the moment you encounter them. We have to wonder what kind of comments this man receives, or if children just point, cry and run away.

14. What Do You Do When Your Tattoo of Chinese Characters Translates to ‘Turkey Sandwich?’

What happens when your cool Chinese character tattoo turns out to say something quite different than you intended? How many people loved their body art before verifying it with Google Translate? In this case, the tattooed person found out they had a turkey sandwich inked onto their skin.

15. There Has to Be a Better Way to Showcase Your Love of Horses

Back tattoos can be risky, and you might not realize exactly what you got until you take your shirt off and await the comments. If we had to guess, this person had hoped for a better inspiration of horses before getting this bizarre lack of reality.

16. It’s the Tattoo of Two Micheals

You have to wonder what is the story behind this tattoo fail. Did the tattoo recipient mix up their celebrities named “Michael,” or was this design a painful reminder to the man that he couldn’t decide who he admired more?

It’s never a good idea to tattoo a hopeful prediction onto your body. In fact, it can become a permanent painful reminder of your favorite sports stars’ big loss. In this case of an epic tattoo fail, a Cowboys fan obviously hoped their team would win the Super Bowl in 2017, only to instead score a tattoo fail when the Patriots prevailed.

18. Sometimes a Funny Tattoo Just Makes You Ask, ‘Why?’

It’s a sad reality that tattoo fails happen when words are misspelled or the reality of the designs fails to meet expectations. Then there are tattoo fails that leave you wondering, “Why?” Such is the case with this epic tattoo fail, which is of course atrocious. Surely, the man was hoping for one thing: comments.

How to Avoid Your Own Tattoo Fail

Whether it’s on your stomach, back, arm or another body part, nobody wants to experience a tattoo fail. Fortunately, a few simple steps can avoid a lifetime of regret: